Gabriella Montez is the new student who’s struggling to find her place at East High. She’s a Renaissance woman who doesn’t fully identify with any of the cliques, and so she’s taking her time – and realizing her confidence – along the way. Smart and independent, Gabriella can be shy and vulnerable at times. She comes into her own when she discovers her talent and love for singing with Troy, so look for a strong actor with a fantastic voice.Gender: Female
Vocal range top: D5
Vocal range bottom: A3

Troy Bolton, the most popular student at East High, is the star of the basketball team who yearns to be more than what others – especially his dad, Coach Bolton – want him to be. A natural athlete and leader with charm to spare, Troy discovers he loves to sing, but is afraid to admit it to his basketball buddies. Look for a solid actor who can convey the full range of Troy’s emotions from sensitive to self-assured, and who can dance and sing very well. Consider auditioning your potential Troys and Gabriellas together to get a sense of the pair’s dynamic.Gender: Male
Vocal range top: Bb3
Vocal range bottom: Eb2

Sharpay Evans is the dramatic and self- centered star of the school musicals. Between her and Ryan, she’s the alpha twin – over-the-top, demanding, and always “on,” with a flair for the theatrical. This diva knows how to work a crowd, so cast a performer with solid acting chops and strong singing and dancing skills.Gender: Female
Vocal range top: A4
Vocal range bottom: A3

Ryan Evans is Sharpay’s fraternal twin and, like her, he lives to sing, dance, and get loads of attention. Subordinate to his sister, Ryan generally follows Sharpay’s orders and lets her have the spotlight, but he longs to break free from her shadow and assert himself. Choose a “triple threat” for this actor – strong singer, dancer, and actor – because everything Ryan does is calculated and executed impeccably. Consider auditioning Ryan and Sharpay in pairs as the success of “Bop to the Top” depends on this dynamic duo performing perfectly – and with a ton of energy.Gender: Male
Vocal range top: A3
Vocal range bottom: G2

Kelsi Nielsen, the neo-feminist writer- composer of the winter musical, Juliet and Romeo, possesses a shy demeanor but no tolerance for the egocentric likes of Sharpay. With only one lyric to sing, focus on finding a strong actor who can play the compassionate underdog with intelligence and an uncanny ability to shoot zingers at Sharpay with timing and accuracy.Gender: Female
Vocal range top: A4
Vocal range bottom: D4

Chad Danforth, one of Troy’s best friends, is a sports fanatic. Focused on winning the basketball championship, Chad slowly begins to understand that there might be more to life than ball – including his crush on Taylor. Look for an actor that partners naturally with Troy, is a leader of his own accord, and can handle a couple of short solos and acting scenes.Gender: Male
Vocal range top: G3
Vocal range bottom: B2

Zeke Baylor, Troy’s other best buddy, is a basketball player with a sweet side. He has two secrets: a crush on Sharpay and a love for baking! Look for an actor with some singing chops who can portray this Wildcat with no shame in his (basketball or baking) game. Zeke has some higher parts to sing, so if necessary, the actor you cast can speak-sing parts that may be out of his natural range.Gender: Male
Vocal range top: G#3
Vocal range bottom: G2

Taylor McKessie, the very put-together president of the Science Club, is super-assertive and very intent on Gabriella joining the Science Decathlon team so they can (finally!) win the competition. Taylor has a hidden soft spot for Chad, but would never let it be known that she’s into a jock, so cast a performer who can portray confidence – and just a slight air of pretentiousness.Gender: Female
Vocal range top: A3
Vocal range bottom: A2

Ms. Darbus is East High’s eccentric drama teacher. Passionate and disciplined, she never stops trying to enrich the lives of her students through the wonders of live theater. Look for a performer who knows how to milk every line and gesture for this role, as the key to Darbus is in her killer comic timing. Be careful of making her too wacky, though; this educator genuinely loves her art and her students, so make sure her heart shines through.Gender: Female

Coach Bolton, the stern basketball coach and Troy’s sometimes overbearing dad, lost the big game years ago and wants a second chance through his basketball-star son. Cast an actor who can handle the demands of this mature role – and who can convincingly and comically spar with Ms. Darbus.Gender: Male

Martha Cox, a proud member of the Science Club, possesses a private passion for break dancing. Look for a truly terrific dancer who can sing, or one who can comically approach the role as a super-enthusiastic, but talentless, dancer.Gender: Female
Vocal range top: B4
Vocal range bottom: G3

The ensemble is your show’s primary group of performers from which you will pull the featured roles and other, perhaps smaller, ensembles. Be sure to select strong singers – as few or as many as your production requires – as all ensembles require group singing. The featured roles call for either solo singing or solo acting, or both.

The BRAINIACS, headed by Taylor McKessie, are the smartest girls and boys in school, including Martha Cox and the change-adverse KRATNOFF.

The JOCKS and CHEERLEADERS are the East High athletes, including Troy, Chad, and Zeke. Both of these groups can be a mix of boys and girls.

The THESPIANS are the drama lovers, including Kelsi, Sharpay, and Ryan, as well as the following auditionees: CATHY, who belts like Ethel Merman, CYNDRA, the opera-lover, JAMES, who can’t sing on pitch and SUSAN, the wannabe pop star.

The PARTY KIDS are students in Troy and Gabriella’s karaoke flashback.

The REBELS, including Troy and Gabriella, don’t stick to the status quo, unlike the various school cliques.

Other featured performers include:

JACK SCOTT, the school announcer with a larger-than-life personality, longs to be a D.J. Look for an actor who will have no problem making this role his own, creating a quirky radio personality with a unique sense of style. While this actor will primarily stay as Jack throughout, there are opportunities to join ensemble numbers such as “Stick to the Status Quo” and “Get’cha Head in the Game.”

DRUM MAJOR, who cheers on the Wildcats.

MODERATOR, for the Science Decathlon (can be double cast as Ms. Tenny) 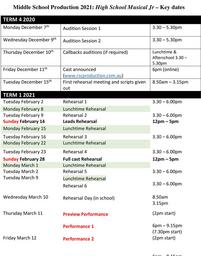 WE'RE ALL IN THIS TOGETHER

Selected students may be invited to call back auditions (if required) on Thursday December 10th at either lunchtime or after school from approx. 3.30pm until 5.30pm.
Before committing to an audition, you can save us all a lot of time by carefully checking the commitment dates below, to ensure that you are free to participate in all rehearsals and performances. Please don’t apply to audition if you can’t make it to rehearsals or performances.You do not need to do anything else at this stage. 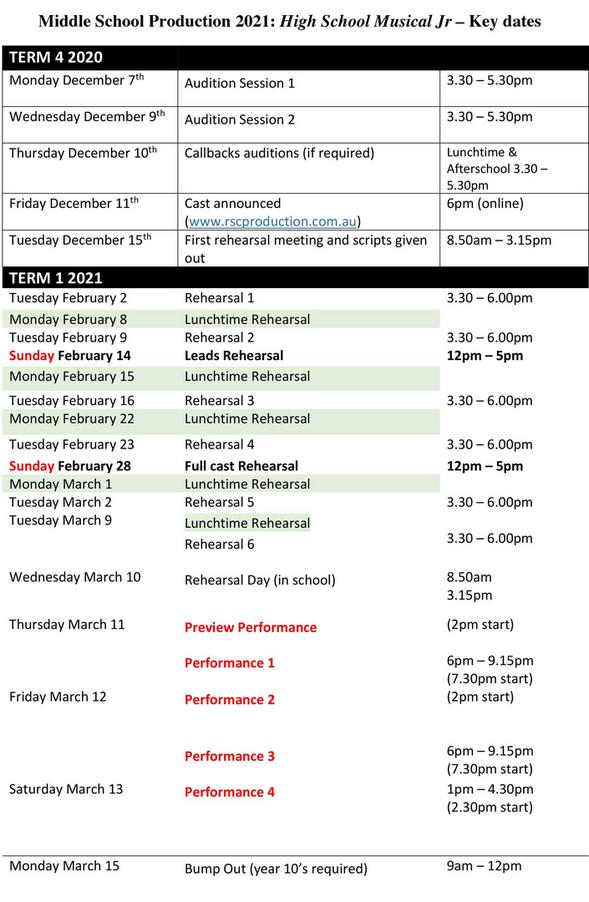 BOP TO THE TOP 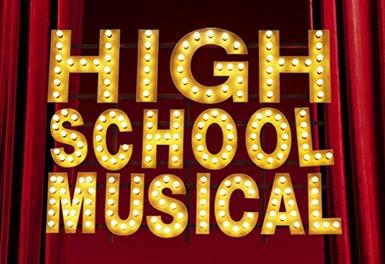 Disney smash hit movie musical comes to life on stage in Disney’s High School Musical JR.! Troy, Gabriella and the students of East High must deal with issues of love, friends and family while balancing their classes and extra curricular activities. The show’s infectious, danceable songs are sure to engage performers and audiences alike.

It’s the first day after winter break at East High. The Jocks, Brainiacs, Thespians and Skater Dudes all find their cliques. Basketball team captain and resident jock, Troy, discovers that the brainy Gabriella, a girl he met singing karaoke on his ski trip, has just enrolled at East High. The couple cause an upheaval when they decide to audition for the high school musical. Although many students resent the threat posed to the "status quo," Troy and Gabriella’s alliance might just open the door for others to shine as well.

Auditions for the Middle School Production will take place on the following days:
Monday December 7
Wednesday December 9
The audition times are from 3.30pm until 5.30pm in the Gym/Hall/Jr School.
​You must sign up for 1 of these sessions by filling out the google form on the following link by Monday November 30th:
https://forms.gle/k8PcsCHB4nyZe5P29

At the audition, you will perform a section of one of the following songs: